WHAT IS AN ORIGINAL AUSTRALIAN LABRADOODLE?

Click on the below link for a great article that explains how Australian Labradoodles are different from the others . . . . . . . . .

Are Australian Labradoodles really different from others, click here to better understand the differences?

In the early days, the Australian Labradoodle was simply a cross between a Labrador Retriever and a Standard Poodle.  Dogs from this cross typically were bred to each other over future generations, whereby the Australian dogs are also know as “Multi-generational” Labradoodles.

Then, in the late 1980’s, Tegan Park and Rutland Manor (established kennels in Australia), the two founders of the Australian Labradoodle as we know it today, began carefully infusing several other breeds into early generations of their Lab/Poodle crosses, to improve temperament, coat, conformation, and size.  The infused breeds include Irish Water Spaniel as well as the American and English Cocker Spaniel.  The resulting labradoodles subsequently have been bred to each other, continuing the multi-generational tradition.

Labradoodle variations are distinguished by their genetic comprise and therefore assorted traits, such as their temperament, coat type and physical conformation. Various breeds and Labrador Retriever to include the Irish Water Spaniel, Curly Coat Retreiver, and American or English Cocker Spaniel. These breeds have been carefully selected and limitedly infused into Australian Multigenerational  Labradoodle bloodline originated in Australia in the breeding programs of Tegan Park and Rutland Manor.

There is incredible diversity in coat possibilities from chalk-white to indulgent cream, gold, apricot, beautiful reds, chocolate, cafe`, striking black and everything in between. It is important to note that slight variations in color will occur and a pup may not retain his original puppy color. At times, a puppy’s coat will lighten with age but, may to everyone’s surprise even darken. Unfortunately, there isn’t an exact science as to what exact color your puppy will eventually become. Coat color will range in shade and intensity.
Coat types can be categorized into three key types: wool, fleece and hair. Wool and fleece coats tend to be non-shedding while hair coats will have slight shedding tendencies. To select the best coat for you, the extent of allergies in your home must be assessed.
Fleece: This is the coat that most people associate with a Labradoodle. The feel should be silky and soft. It can range from being almost striaght, (straight/open fleece) or with just a few waves in it (wavy fleece). Regardless, of the wave or curl this coat must be groomed in order to be mat free. Most often this coat is on-shedding, however, it is typical to find the occasional “dust bunny” around the house. This coat is frequently acceptable for people with allergies.
Fleece Types: Open Fleece coat – non-shedding; Wavy Fleece coat – non-shedding; Curly Fleece coat – non-shedding

Wool: This is very dense and curly like a poodle. A wool coat typically has more cotton-like feel. It can be kept long but requires more grooming in this style. If it is kept short this coat is easy to maintain and usually non-shedding and allergy friendly.
Wool Types: Wool, non-shedding
Hair: This coat is usually seen in early generation dogs. Tends to be straighter or slightly wavy and texture can be course to the feel. This coat may have that doggy odor and varying degrees of shedding. Typically this is lower maintenance coat. Compatibility with allergy suffers varies greatly because some shed immensely, others minimally.
Hair Types: Hair, Slight shedding
Sizes:
Australian Multigenerational Labradoodles have an average life expectancy of 12-15 years. They become in a variety of sizes ranging from 15 to 65 pounds and 14 to 24 inches, spanning from the wither to the ground. They are classified into three major sizes including miniature, medium and standard. The prerequisites for each are shown below.
What is the difference between an F1, F1B and the various types of Australian Labradoodles? How are Labradoodles graded?

F1: The “F” stands for “filial generation”. “F1” means “first generation” and is a common scientific term. This, in the Labradoodle breed, is the coding for first-cross, purebred poodle to purebred Labrador Retriever. The results are mixed, as this is not the breeding of two “like” dogs, or dogs that resemble each other. F1 Labradoodles typically are moderate- to low- shedding and have a sparse-hair to fleece coat.

F1B: The additional “B” refers to backcross — an F1 Labradoodle, as defined above, bred (or backcrossed) to a purebred Poodle. Again, the results are mixed, as this is not the breeding of two “like” dogs. F1B Labradoodles typically are low- to non-shedding (or as much as any dog can be non-shedding) and often have a hair or fleece coat.

Purebred Australian Labradoodle: The Merriam-Webster Dictionary first defined “purebred” in 1852 as “bred from members of a recognized breed, strain, or kind without admixture of other blood over many generations.” The AKC, meanwhile, requires four generations of like-to-like matings in their foundation service. 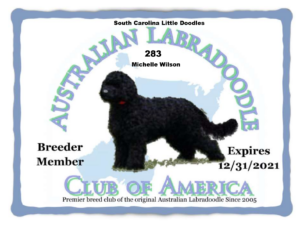